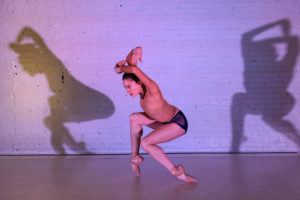 I’ve seen many dance companies through my time as a professor/director of Music and resident of New York City for decades, but I was blown away two weekends ago by a rising, ingenuous and brilliant choreographer, Sheena Annalise and her growingly recognizable company Arch Contemporary Ballet.

Innate Prismrose premiered March 24th – 26th at an alternative white theatre space, Alchemical Theatre Laboratory, in Union Square. It was an emotional journey performed by a dexterous quintet of dancers with collaborations that made a statement.

It has been some time since I have been moved by a contemporary ballet production, as most ‘new works’ seem to be cold, lifeless, and with no personality. Annalise is shaking up contemporary ballet with an emotional work and it is refreshing.  The work was split into four parts – Fragmented, Self Reliance, Animosity, and Innate.

Detroit light artist, Robert Glowacki, went for a minimalist appeal that resonated with the ballet as blue laser projections crossed the stage and had spread blue laser light throughout the medium of the space. The alternating between cold and warm environments set the temperature of the dancer’s behavior and was visually effective.

Fragmented started with the dancers against a cold brick wall standing as one, and the dancers peeled off in twos dissolving their illusion of happiness in what seemed to be a desolate relationship between every pas de deux. Annalise’s pas de deux work is hypnotizing, as the intricate weaving of body parts and shapes of their figures come together as one body when they dance.

Self Reliance was just that, a sense of self reliance. The dancers started off with impressively executed slow movement and as each dancer stepped off the ledge of the wall they returned to the stage a little faster and with more intent then their previous phrase. It felt as if they were talking to the audience and the conversation was getting more heated as time went on. Soloist, Katelyn Somers, was truly radiant. Her first solo gave me chills as she lifted her arms in a tangled manner, and pulled them up and over her head as if she had pulled the weight off her shoulders. She ever-so slightly tilted her head as they came down as if she was in mid conversation asking us to understand her. It was a thrilling chase. They say every dancer has their company that truly makes them an artist not just a dancer, and she has found that through Arch Contemporary Ballet and Annalise’s movement. The striking resemblance between Annalise and Somers also can’t be missed, as if Somers were a reflection of the ingenious choreographer’s soul on stage. Somers is a soon to be recognized face in dance as an Arch Contemporary Ballet dancer. She is magnetic in Annalise’s choreography. The dancers ended flushed and with their backs turned to the wall. They slowly fall to a sitting position that made the audience feel as if they were done, and as if they were exhausted of telling their personal truths. It was an impactful moment that led right into a sea of sadness running through my veins, which I didn’t know I could feel from a contemporary work.

Innate is a sinful section, like a siren luring you in. The carnal environment and seductively entrancing body lines makes you bashful watching, yet the movement makes your eyes keep wandering to the slim limbs of the tenacious dancers Tori Hey and Somers. You can’t look away. Much like cursive writing, your eyes follow their instrument as they tell you a story. An athletic and muscular memorable soloist, Wilderlei Rudson, gave a compelling performance drenched in sweat and sentiment; although his ballet technique could achieve higher growth. The piece came full circle in the revolution of modern age heartbreak. With a bestial culture amongst young millenials, I interpreted Annalise’s concept of getting back to a primal state reminiscent of simpler romantic times. The variety of movement and emotion left me wanting more.

Throughout the ballet composer Matthew A.C. Cohen, left me on the edge of my seat with what was to come. I felt a wave of emotions guided by the dancers. Annalise’s marriage between choreographing a ballet first and creating music to it after is rewarding and well executed. It was a bittersweet reminder of the admiration the recently passed post modern pillar of dance, Trisha Brown, had for Merce Cunningham and his confidant/close collaborator John Cage.

The four part work ended with a climactic afterthought, that was appreciated and exhausting in the best ways. The audience had to sit still for a minute to digest the beauty of such an emotional path. Hush and murmuring tones of other audience members made me feel I was not alone in this journey, and felt as if we had all shared an experience by watching together. A great sense of comradely flushed us all as if we had spilled our darkest secrets to each other sitting in that audience.

As the dancers and collaborators take their bows, I was even more shell shocked. I had no idea how such a young mind was the brain child behind such an inventive company. I have heard of her name but never have seen her bright face; I was blown away by the maturity of Annalise’s mind compared to her youthful body as she took the stage to bow with her dancers. At 25, she has to be the youngest working female Artistic Director with such successful repertoire.

With a few casting changes and development of stamina of her young troupe, she will quickly rise as a top company in the saturated NYC dance scene. Two of the unison sections could have been more together to put the work over the edge but I am sure dancers will be fleeing across the country to perform her works. With a higher level of technical dancers I can only imagine what her work is capable of expressing.

Arch Ballet is THE promising future of ballet during these trivial times and I am certain Sheena Annalise will make history as one of the greats in choreography in the years to come. Her innovative mind and her own distinct language of mesmerizing body lineage combined with generating new audiences in the fields of music, art, fashion, technology, and diversity will continue to build a lasting impression.

Personally, my first impression has me saying, Arch Contemporary B[allet]rilliant !

I am looking forward to their upcoming performances in May 30 – June 1, August 11-13, and November 17 – 19 that all seem to showcase new ballets with wildly impressive concepts. Brava!