Fallon Gannon wakes up at 4:30 every morning. By 5:15, she’s hopped a train to make a 6 a.m. bus from Philadelphia to New York City. She arrives in Manhattan by eight and runs to the subway so she’s in the studio 30 minutes later for warm-up.

Rehearsals for Arch Contemporary Ballet end by 2 p.m., when Gannon catches the bus back. Her fare is $25.50 round-trip, which she affords by teaching at professional dance academies and both private and public schools from 4:30-9 every night. Once home, she tries to get in a few REM cycles before starting again.

It’s not normal for dancers to have such long commutes, or to have workdays that can last more than 17 hours.But Gannon sacrifices the luxury of time for another advantage – a job as a professional dancer with a company that’s pushing boundaries.

Founded by artistic director and choreographer Sheena Annalise in 2013, Arch takes a page from John Cage and Merce Cunningham’s book. The two legends used to conceive of a score and a series of movements independently, and then combine them to create a perfectly random and spontaneous piece. Annalise takes their process one step further, flipping the script on the dance-music relationship by asking her composers to make music to her motions.

“It allows us to really create the tempos and timings we like,” Annalise said. “There’s no limitations to what the dancers are doing because we’re creating the tempo.”

Arch’s ensemble of 12 rehearses for months before adding music to the mix a few weeks before a premiere. In the meantime, dancers find an internal melody and listen to the rhythms of their partners’ bodies to keep a beat. 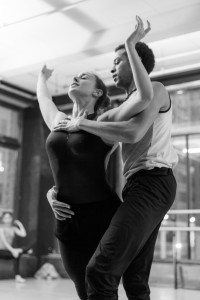 “There’s not an opportunity like this in Philadelphia, and I’m glad that I am able to do the commute and that it works with my schedule,” said Gannon, who joined the company this season.

She’s not alone in going such lengths to perform with the troupe. Arch soloist Martin Skocelas also makes the Philly-New York commute every day. After moving to Philadelphia to join BalletFleming last year, Skocelas auditioned for Arch and fell in love with its way of doing things. In college, he studied both musical theater and dance, and he wanted to explore the idiosyncratic, engaged relationship between the company’s musicians and dancers. His shift in workplace also allowed him to infiltrate the greater New York arts scene, a fabled haven for those bent on innovation.

“It’s a better caliber of creativeness in a more concentrated spot,” he said. “And I want to put myself in that pool with Arch.”

While Gannon and Skocelas chase their dreams in Manhattan, they still have to face the reality of rent and the added burden of their commute costs. Their budgets are seldom better than stretched, since the performing arts are often underfunded, and dancers’ paychecks are typically next to nothing. To make ends meet, Skocelas works at Pennsylvania dance shops and teaches his craft at Germantown Friends School. Gannon also works as a dance instructor, at Khepera Charter School through the Rock School for Dance Education Rock Reach Program, and at the Philadelphia School. 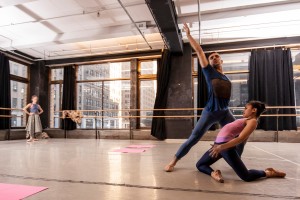 For Skocelas, being able to contribute to the Philadelphia community while taking advantage of what New York has to offer has proven to be the best of both worlds, commute and all.

“It’s the best experience because I can go work in the city and be right in the heart of New York, and sit there and be a part of the dance scene,” he said. “But then I still also [get] to go back home to Philadelphia.”

Arch Contemporary Ballet will perform June 14-16 at the Davenport Theatre in Manhattan.