Often when choreographers are itching to expand their repertory, they fall flat on their face with going outside of their ‘norm’ or applauded style. The innovator behind Arch Contemporary Ballet gave some lucky attendees a taste of what she can do in a recent rehearsal for her latest creation ‘Two Steps Backward’.

Artistic director and choreographer Sheena Annalise opened with a disclaimer that this new ballet is ‘Classic Arch Ballet with a Twist’ as she invited us all along on the journey of navigating the creation of expanding herself as an artist.

Right away I go, oh no. This is going to be a rock bottom choice. But how far can a choreographer really stem away from their own developing and more and more recognizable technique? Yes, it seems she has challenged herself in creating new movement and aesthetic but it was not as far different as she may believe — positively, what is an artist if you can’t recognize their work anyways?

The rehearsal began diving right into movement – most of her dancers needed no introduction as some are crowd favorites for these firecracker dancers and their growing presence. 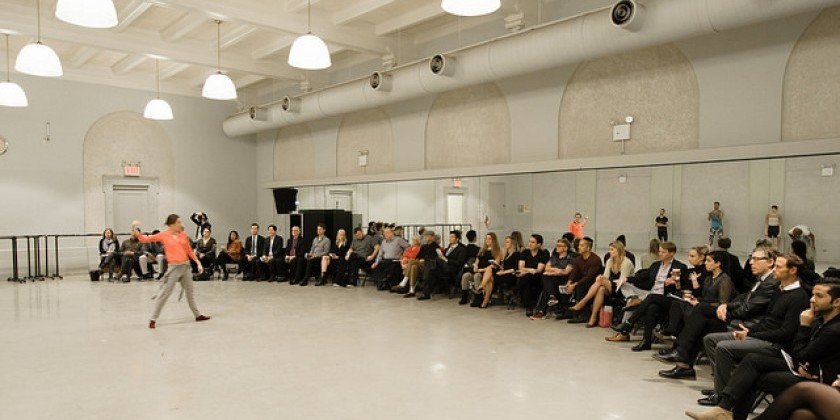 Keep in mind, this company has music created for their works so there was no music present at this rehearsal.

The leggy redhead Tori Hey opened the number with exquisite arm shapes that led into a footwork combination where she snapped her arms behind her and then in front of her body while pulling her weight forward and backward. It was a subtle yet effective gesture that made you think of classical ballet on steroids – alluring choreography concept. Quick, boisterous classical ballet port de bras and feet positions amped to subtle placement changes derriere and devant. She was then joined by crowd favorite Aoi Ohno in a female pas de deux section, they entangled themselves into a melting position where Ohno seamlessly bends back into the floor and comes right back up like a yo yo coming directly from Hey’s arm.

Hey was met by her statuesque male counterpart Motasem Amayri, a new face for Arch Ballet, where they play with a ‘twist’ on tangled limbs. Their long legs extend together then suddenly a fouette brings them into a locked position resembling much like an old fashioned necklace clasp where you place and twist to a locked but beautiful setting. Amayri pushes her limb out of the hold to repeat into a different shape with the same aesthetic to get there. I hope to see more of this throughout the piece as it was entertaining; a sturdy hold followed by a melted a sigh of relief. I found my head twisting a little every time they twisted to a new direction.

This led into a group number where the energy was uplifting, fast, and created exceptional visual effects. Limbs flying everywhere with tenacity, mastery, and precision. At one point the dancer’s limbs looked much like a four point intersection with the quickest strikes of legs – a right leg battement in second, left leg battement derriere, into a sweeping arm motion to get the right leg into a sultry penche transitioned into a rapid chug landing with the left leg in a battement devant. It happened too fast, all you see is a four way path to extension heaven in these lengthy dancers. A sight to see, I look forward to witnessing this section with music for higher intensity as it is hard to get a full effect without music.

After the initial showing Annalise goes into creation mode with her team of six diverse dancers. Annalise explained ‘Two Steps Backward’ is symbolic to trying your hardest yet still failing. It takes on a somber tone when you think about it, but she wants the audience to feel empowered by it and she plans to use an upbeat EDM style composition and smoke pyrotechnics to create a more lively atmosphere. She stated, “Failing is natural and that you will not always succeed in every little thing you do, but life goes on and you keep opening windows when the doors close is what I want to portray.” Her works may be intimidating in scale but underneath they often take on a nature of simplicity which makes it relatable and human, this new work is no different.

Hey and her partner took the forefront in the beginning of creating new movement. Sheena Annalise creating in action is quite the sight as she uses words it seems only her dancers understand sometimes like watching a foreign film – enjoyable, hard to understand, but you still keep watching enthrallingly. She took a moment to explain Arch Ballet’s technique and gave us some insight on her vocabulary which helped– these were some of the pointed out words and explanation:

Her work normally represents a geometric fluidity between sharp movement and winding supple movement. A collection of C Curves and shapes with distinct Annalise styled gestures and references which are identifiable as her choreography. In this new work, she added new features and a different aesthetic behind where the movement came from – refreshing for choreographer’s to change up their style.

Two Steps Backward takes on a very grounded and serious tone but still identifying as whimsical. The rapid fast movement gets your blood boiling in an amped up away, a transient feeling from an audience’s everyday routine. The punctuation of the movement provides energy shooting up from the ground to their heads and it is indeed engaging – created by sudden stops between long, quick, and demanding phrase work. I hope to see a contrast from this new hard hitting style to a mix of her classic serpentine phrase work. She could even think about expanding the piece with a slow section to keep the audience heart rates going up and down. I would also like to see more pas de deux, a staple of her previous works always included innovative partner work – this open rehearsal was mostly free standing dancers. As a rising luminary of contemporary ballet though it was nice to see a change in choreographic approach.

There are companies out there producing the same choreography over and over again, a leading downfall of contemporary ballet style. After all contemporary means to be new, present-day, current, and the latest – the greatest way to achieve this is to keep asking questions on how to expand.

Annalise is indeed expanding her choreographic abilities and is creating a more diverse palette for her audience but I’m thankful you can still recognize her work through these new changes for this upcoming work.

The full work will be performed on April 29th – May 1st at the Davenport Theatre NYC and an Autism Friendly performance on April 28th at Loew’s Jersey City. Tickets are $15 – $50.

Photos from the Making of a World Premiere, courtesy of Suxiao Yang and Arch Ballet website. 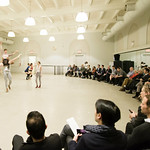 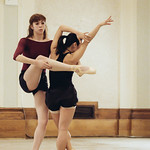